← more from
Båul
Get fresh music recommendations delivered to your inbox every Friday.
We've updated our Terms of Use. You can review the changes here.

The Place Where I Meet Jesus [Single] 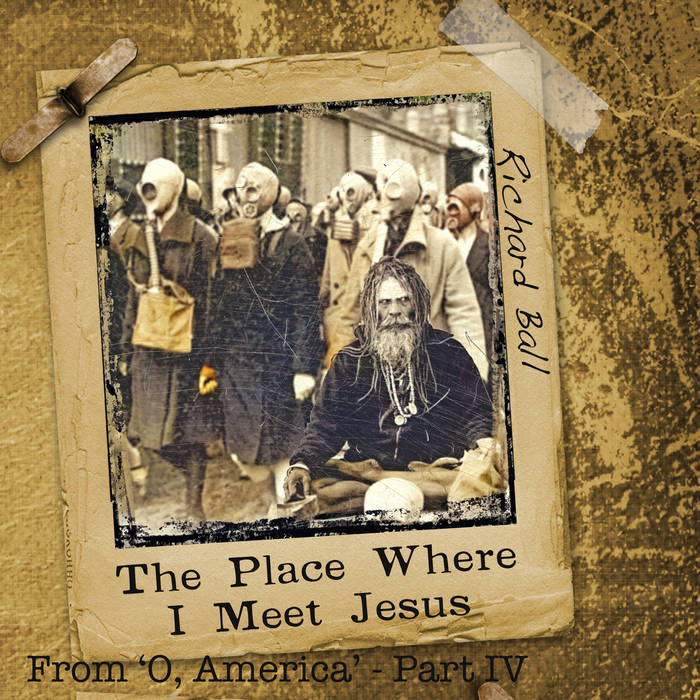 A Psycho-social/Humanitarian analysis of ‘The Place Where I Meet Jesus.’

As an artist, I rarely like to explain my work. However, this video has a lot of archetypal symbolism that I think can be enhanced by an analysis. Though the song and the video were spontaneous arising - in Buddhism, we would say that it came through me from the Basic Space of Phenomenon, but the meaning is very clear to me, so I will explain it.

The poem revealed itself on my daily morning walk: There is a place I call ‘The Place Where I Meet Jesus’ that is about a quarter mile away from the house. I call it that because that seems to be the place where I have walked far enough that my thinking mind relaxes, and where my dog, Sunny, and I seem to find a sync in our walk: He stops the constant looking and sniffing and has completed his ‘constitution,’ and I have let go of the list-making and practical matters that arise when in the house or yard. I have started calling the state of spontaneous presence as ‘Jesus.’

The poem is a description of what this moment feels like:


The Place Where I Meet Jesus

I meet Jesus every morning
On my morning walk.
He doesn’t say a thing to me
Just quiets down my thoughts.

He opens me up with loving kindness
Just raises up my heart
And fill me with joy
In a world that is quite dark.

Just lets me know we’re all insane
And no one is to blame.
Everything just goes away,
It’s just a deity today.

So that we come to see how weird
This world and its personalities
Have to learn that we’re all in Heaven
But they’ve made it seem like hell.

But in the quiet of the moment
The beauty is all around
That’s what Jesus says to me
Without a single sound.

The video opens with an explosion. This represents the explosion that Jesus’ teachings of Love created on our planet. It, also, represents his birth - which is well described as a miracle birth. And while it may be unique and miraculous beyond what is typical, every life is precious and miraculous and filled with the opportunity to move to a high level of consciousness through the teachings of The Masters like Jesus.

The we see Jesus as a man. There is very little written about his childhood and young adult life. Some believe he went to India or Tibet, or worked as a carpenter. Suffice it to say, it takes all of us several decades to develop the foundation for our practice. Even enlightened beings, like The Dalai Lama, spent his youth studying with teachers and developing the skills of his own practice and leadership.

Then there is a scene of a yogi and people in gas masks and, in the background, a fast cascade of images. The yogi represents the Witness or Observer - that part of our mind that observes our own mind. This is universal in all contemplative practices, including Christianity, where it is usually referred to as ‘Prayer.’ The cascading images are our untamed, continuous thoughts.

This image stays in the background, except for the phrase ‘quiets down my thoughts,’ when there is an image of the moon and flames. One is reflective, one is the source of light.

This part of the video represents typical life. Busy, scattered, chaotic. My dog, Sunny, who walks with me is sitting beside me. The images of me sitting among piles of books, boxes, instrument cases, etc… represents the chaos of the learning mind. Sorting through so many thoughts and ideas. Scattered and overwhelming.

The scene of the cross being carried through Red Square in Moscow is footage I took in 1990, when, for Christmas Eve, they were allowed, for the first time since 1917, to have an open religious Christmas celebration in a public space. They carried the cross and two candles, carried by a priest and some altar boys, around the symbol of communism and atheism amid the Russian Orthodox churches of The Kremlin. Not shown, but, simultaneously, soldiers were changing the guard at Lenin’s tomb, which is right in the wall of The Kremlin.

There is a recurring image of a Naga Yogi doing pranayama practice that keeps showing up. Yogis, regardless of religion, are really beyond theism, and are just in direct and constant contact with God - or the Basic Space of Phenomenon, known in Buddhism as The Dharmakaya.

Then there is the scene of nails being hammered and the raising of the cross - The Passion and Crucifixion of Jesus.


This, I believe, is the overcoming. That Jesus was able to cast off the pain and suffering of conditioned existence - ‘Samsara,’ which is illusory in terms of where we focus our attention, what we value (like money and material possessions.)

The only way to escape the illusions of samsara is to go through the pain and suffering and to accept it as a rite of passage, rather than cling to the illusion.

‘Jesus lets me know we’re all insane. And no one is to blame.’ Followed by the Naga Yogi practicing. We are just born and raised with ignorance, and our work is to overcome ignorance.


The phrase ‘it’s just a deity today,’ means that Jesus is now an idea, a teacher, and a deity - who can interact with humans and animals, but who is not in a physical state. Buddhists refer to this as The Sambogakaya. The body of Buddha/Christ which is images, thoughts, dreams, divine inspirations, etc…
Then the Witness yogi watches the face of Jesus as he is in contemplation/meditation. Then Jesus stands up, and there is a hole in his hand, indicating that he is, now, resurrected.

The crucifixion and resurrection are loaded with so many meanings and so many levels. My attempt is not to challenge or negate any interpretations by the faithful, or anyone else. Just one of the multiple, and all equally valid, archetypes is the resurrection can mean life beyond ignorance.

When Jesus stands up, the symbol of the chaotic mind, observer, fast images and gas masked people, disappears, and a family is playing, happily, on the beach.‘Have to learn that we’re all in Heaven. But they’ve made it seem like hell.’

The happy family (Heaven) fades into images, mostly of religious/political fanaticism in Afghanistan and other places, where conflicts about religion have created so much suffering.

‘But in the quiet of the moment. The beauty is all around. That’s what Jesus says to me, Without a single sound.’

The images suddenly become the most beautiful pictures I could find in my file of photos I’ve taken, Juxtaposed with a picture of the rock on Jesus’ tomb being rolled away and reveal an empty chamber. Emptiness, in Buddhism, is an ultimate state. Enlightenment.

There are a few pictures, such as the red sun, that point to some of the problems that exist. The red sun occurs here when our valley is filled with smoke from wildfires and it changes the color of the sun.

When I return for my little cameo as the songwriter and player, I am sitting in front of the books on shelves. This is to symbolize that study and practice can help us move from the disorganized state of ideas (books) that are scattered and chaotic, to, at least, having a little more order as we work at following Jesus’, and other Masters’ paths.

The Naga Yogi returns over images of A Navajo sweat lodge, Buddha and Canyon de Chelly, a Navajo holy place. Then there is an image of Black Elk, a Lakota Holy Man, who was both a Lokota mystic practitioner and a Catholic clergyman.

Then, it is concluded with images of smiling, diverse faces, just as a counter to the darkness of the beginning of the video. They represent that there are many paths that can take people to happiness, and that happiness is a state of love that is desired, that motivates us, and that is attainable.

And it concludes with Jesus walking.

The Place Where I Meet Jesus

I meet Jesus every morning
On my morning walk.
He doesn’t say a thing to me
Just quiets down my thoughts.

He opens me up with loving kindness
Just raises up my heart
And fill me with joy
In a world that is quite dark.

Just lets me know we’re all insane
And no one is to blame.
Everything just goes away,
It’s just a deity today.

So that we come to see how weird
This world and its personalities
Have to learn that we’re all in Heaven
But they’ve made it seem like hell.

But in the quiet of the moment
The beauty is all around
That’s what Jesus says to me
Without a single sound.

I am a composer, recording artist and multi-instrumentalist specializing in combining jazz and world music. I play flutes and other instruments from many parts of the world. Be sure to check my other jazz projects on Bandcamp! beforetherain.bandcamp.com, walkingeagle.bandcamp.com, and conceptevergreen.bandcamp.com ... more

Bandcamp Daily  your guide to the world of Bandcamp